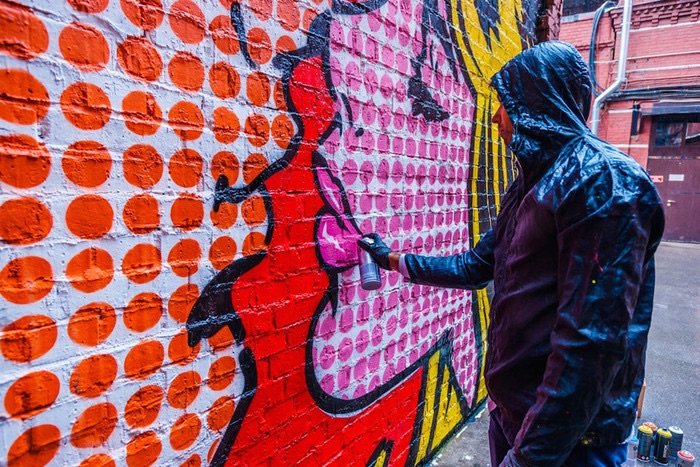 310squad – Moscow based project of artist Stepan Krasnov. Street work “310” can be found in the Russian cities (Moscow, Nizhny Novgorod, Vyksa, Magnitogorsk, Ufa, Yekaterinburg, Perm, and others.), Kazakhstan, Germany, Spain, France, and the canvases are in private and public collections in the USA, Switzerland and Russia, including the Tretyakov gallery collections.
Although the composition of the creative team of the changes occurred, however it should be assumed that it is basically a one man project – Stepan Krasnov, who for nearly 20 years is the ideologist and the permanent leader of the team. During this time the “310” had to go through all the possible stages of street art, and their example, we can easily trace the history of development and current situation of street art in the domestic art market.
The first steps have been made in the distant 1997 with conventional tagging. Then the graffiti and street art were not so popular in Russia and seen as something strange, new, and very fresh, and the city streets were relatively “clean” from street art. It was formed in the late 90s the first part of “310”, which included Stepan Krasnov, Sergey Girin and Evgeny Ivannikov. Basically we wrote a resounding and memorable “evil”, from which subsequently appeared collective name “310”. According S.Krasnova, then “it was pure vandalism: trains, windows and doors of shops, well, itself a large color illustration. Night painting – for the thrill of the day – a beautiful picture. ” A little later, there was interest in more complex figurative compositions, polychrome and lettering fade into the background.
In 2000, the team changed: former members gradually lost interest in street art, replaced by Andrei Tseluiko and Dmitry Levochkin(he later left the band). While continued creative search of their own recognizable style, but even then the main principle of the work was the spontaneity and improvisation: the artists chose to create songs and stories to think straight at the time of the drawing, when “… there is no sketch and the final idea. Begin to paint and falls into some kind of trance. Then at some point you realize that everything is ready. It’s like a puzzle that is going to. ”
Recognizable pop art style, which later became the hallmark 310squad, began to emerge in the works since 2005. On the one hand this was due to the obvious interest of the artist in the pop-art aesthetics, on the other hand halftone dot – artistic technique, which certainly impressed the audience, and at the same time was very simple in design, which means it is perfectly suited for the illegal drawing. Basically, the artist was inspired by the paintings of Roy Lichtenstein: undertook the basic principles of composition and style of the famous American artist, and scenes from contemporary everyday life. It is important to note that the works of Lichtenstein never copied, and were seen as the source. Sometimes the artist experimenting, adding his works elements of surrealism, which creates a complex symbiosis of quotations, references to the art of the past with the modern approach to creativity and subjects.
Now works 310squad equally traced the features of realism, interest in abstract art and of course pop art style. In addition to the active drawing in the urban environment, 310 squad creates installations, objects, paintings become, involved in the gallery and museum exhibitions.